Finally cleaning out my old stock and selling it all very cheap on eBay. So for anyone who is still into card making, stamping, crafting etc take a look. Here is one auction.
https://rover.ebay.com/rover/0/0/0?mpre=https%3A%2F%2Fwww.ebay.com%2Fulk%2Fitm%2F153246976195

Posted by Unknown at 4:07 PM No comments:

Customer Service.... is it alive and well?

I am not one to usually write an article without any pictures for my blog.  Especially if it has nothing to do with saving money or something creative.
So in the name of beauty I will add a photo that my wonderful 17year old daughter took. Isn't she talented? 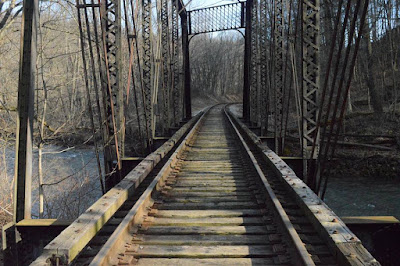 Lately I have been very frustrated with customer service or lack thereof.
With a few exceptions it seems like businesses really don't care if you are satisfied with their products or services. Even local government agencies.
Let me start with March. My daughter wrecked my car.  Being that this is not something that happens everyday and we are in a rural area I was not sure who to call as far as police go.  She was very close to home and called me and I went to the scene. The other driver who was also very young had called the police. We waited over 40 minutes and when nobody arrived I thought I better call again. I called Ohio State Highway patrol. I explained to the dispatcher that I was not sure if we should have called them or the Stark County Sherriff's office. This guy was sooooo rude to me on the phone it was unbelievable. Among other things he said "Well you can call them but I bet they don't come" He was a condescending ass. I wish I wasn't so shell-shocked and would have gotten his name. However, the young state trooper that showed up was very nice and very professional
Onward, to the auto body.  My car was in the shop for over 5 weeks! I know it took my insurance adjuster 1 week to give them approval to work on the car, which I thought was a little excessive, so they actually had only 4 weeks to work on the car.  ONLY, lol. They had more excuses then I can remember. Almassy's Body Shop in Waynesburg used to be a great place, but unbeknownst to me it had changed hands over the years. The people were very nice and polite, but come on... 4 weeks! No offer to reimburse me for a rental, but they did detail my car as an apology, so I was okay with that.  But then I go to pick it up and the bumper was not even on right.  So I had to take it back for another few hours on another day, as I needed my car that day. So I was even more inconvenienced. No offer of making any restitution for wasting more of my time. Suffice it to say I am not going to be using them again. I will make the extra drive to Aman's.
On a good note, a few weeks ago I had a good experience with Dole. Their product was full of mold.  I had a phone call back within hours, along with an email. They reimbursed us over twice the cost of the item. Good job Dole, keep it up.
Yesterday my daughter attempted to order a pizza from a locally owned pizza shop, one that we use a lot.  She just turned 17, and offered to help me spring clean and then pay for a pizza for us to eat. Love that girl! Anyway, she ordered, then asked what it would cost if she upgraded to a large pizza. The young man put the phone down and said "Why can't fu*king people look at a menu" She was so shocked she hung up. I told her to give me the phone and proceeded to call them right back. An older woman answered, I explained what happened and asked her to report her coworker to the owners. She agreed. I thanked her and told her we would eat elsewhere that night. We ordered subs.  About three hours later a lady showed up at my door and said "Are you Michelle?" (evidently they had caller ID) I said I was and she handed me a twenty dollar gift certificate for the pizza shop. She also apologized. Thanks West End pizza, you will continue to have our business!
I could go on and on, really.  PNC Bank is the latest company to tick me off.   They evidently lost my payment, when I asked the gal to wave the late fee, she refused. She said I did not get payment to them on time.  Well, maybe the mail lost it, or maybe they lost it, but I took the time to call and double check when the payment didn't show up on my statement. Do you think I would do that if I just didn't make the payment?  Boy you would have thought I was asking for the world. Then when I asked to talk to her supervisor, she became very hostile. Okay, well bye-bye PNC. Your interest rate is quite high in my opinion anyway.
In the process of firing a lawyer, who is not doing his job and dodging phone calls, as well as blatantly lying to me.
This is in the matter of two months this is just some of the customer service issues I have had.  It really isn't about making the mistakes, but how they are handled. How about you?  Any issues you have had?
Michelle
Posted by Unknown at 10:24 PM 2 comments:

What to do with old faded Pyrex bowls

Do you have old Pyrex bowls sitting around that are faded, chipped etc? Not sure what to do with them?
Well, I took my bowls and made them look new again. I simply spray painted them, and then turned them into planters. Voila, new again, and not in a land fill. 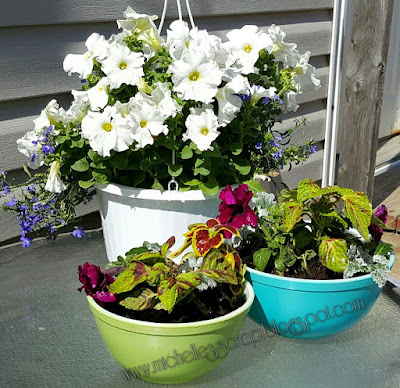 Michelle
Posted by Unknown at 11:39 PM No comments: